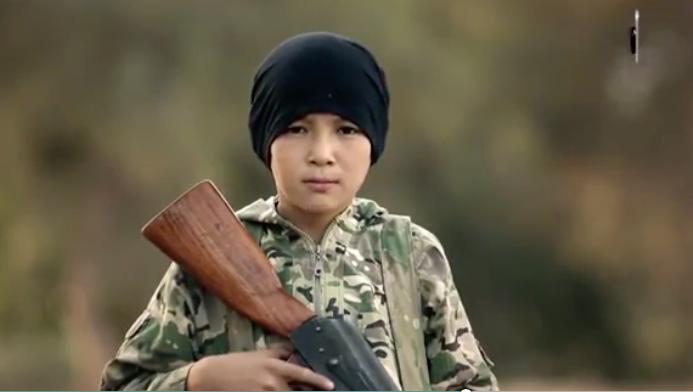 Editor’s Note:  While ISIS appears to be on its last legs militarily, it’s worth remembering who they are and what they do.  This article first appeared in The Havok Journal on 20 March 2017.

Most military veterans are familiar with the term “live fire,” which generally involves the use of “live” (vs. blank or dummy) ammunition, against targets made of paper, plastic, wooden, or metal.

At least, that’s how it works in most professional armies.  Terrorist organizations are a whole other story.

Like they do with just about everything, ISIS has managed to take the “live fire” concept to an extreme.  In their latest, but certainly not last, atrocity they’ve recorded a new tactic:  using radicalized children used to murder helpless captives.

In a well-produced but deeply-shocking video, young children, some of whom appear pre-teen, practice assaulting a multi-story urban structure.  Armed with Glock handguns, dressed in military-style uniforms and moving in tactical formations that indicate some degree of training and proficiency, they systematically clear the building…

…and that’s when the “live fire” really begins.

Seeded inside the building are bound, terrified captives, which the armed children find and then mercilessly gun down, all for the ISIS propaganda machine.  It’s hard to imagine the terror felt by those helpless individuals as they see their deaths coming in the hands of young children.  Yet it happens over, and over, and over again.

This is one of many tactics ISIS uses to sow terror, gain recruits, and to seed the West with “sleeper cell” individuals.  They are, after all, children.  What countries in the West would refuse them entry?

The next time someone says “But they’re only children!” in a discussion about vetting immigrants to America or Europe, show them this video.  Or one of the many others like it.