Originally published on 6 June, 2016.
One of the highlights of my last trip to France was the three days I spent in Normandy, site of the D-Day invasion.  As a professional military guy, this is one of the coolest possible trips because the Normandy campaign had it all – amphibious assaults, airborne drops, tank battles, joint firepower, fighters and bombers, amazing logistic and engineering feats, special operations and much more.  I would highly recommend seeing Omaha Beach, Pegasus Bridge and of course, the American cemetery – still on of the most affecting places I have ever seen.  But my favorite part of my trip was Pointe du Hoc. 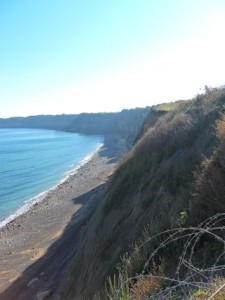 In the overall drama of D-Day and the slaughter on the beaches, Pointe du Hoc was a key but secondary operation which served an important purpose.  Once completed, it was of relatively minor importance to the overall operation.  The extraordinary thing about this operation was the audacity, heroism and bravery exhibited by the men that fought there.

Pointe du Hoc occupied strategic high ground between the Omaha and Utah landing sites.  There isn’t a beach there, just one hundred foot high cliffs to the east and west for several miles making it pretty much unassailable.  It did have unimpeded views of both American landing sites.  The Germans had emplaced a battery of 155mm cannons at the location in hardened bunkers impervious to bombardment and from this location could have easily ranged both landing sites.

The guns themselves would have done minimal damage to warships but the effects of accurate 155mm fire air-bursting over the beaches would have slaughtered troops at both landing sites.  The guns needed to be removed but how does one get to the top of the cliffs in an era before helicopters and precision fires.

The answer was to come at the Pointe from the sea and climb the cliffs.  The mission fell to the 2nd Ranger Battalion, an elite unit of light infantry formed earlier in the war for high-risk sorts of operations – what are now called special operations.  The Ranger’s plan called for them to take boats up to the bottom of the cliffs at high-tide and use specially built ladders and rocket assisted grappling hooks to get to the top.  Because of the dangers of night navigation, the assault occurred in day-light just after a bombardment was supposed to have suppressed the defenders.

Things started to go wrong almost immediately.  The first problem was when the boats got to the cliffs, the cliff height turned out to be higher than the ladders by over 30 feet.  The boats were delayed in arriving at Pointe Du Hoc and pre-assault suppression had already been completed several minutes when the assault began.  The rockets on the grappling hooks confused the Germans for a few minutes making them think that the bombardment had resumed but they quickly recovered and began to fire down on Rangers ascending the ladders and the final 30 feet by rope and hand.  Grenades and Bullets flew in both directions – at one point a Ranger climbed to the top of one of the ladders with a .30 caliber machine gun and fired it upward at the Germans.  It was a desperate affair.

The Rangers made it to the top and their superior training quickly overwhelmed the German artillery soldiers.  The Rangers did not find the guns within the fortifications but a quick search revealed the guns hidden a short distance away and they were destroyed.

The Rangers’ primary objective had been accomplished but the battle was not over.  They moved on to their secondary objective to secure a road leading into the western flank of the Omaha landings but were quickly attacked by an experienced regiment of German soldiers and they were pushed back towards Pointe du Hoc.  The three companies of 2nd Rangers were supposed to be reinforced by the remainder of 2nd Rangers and the entirety of 5th Rangers but weather and navigational errors forced those Rangers to land at Dog Green at Omaha Beach instead.

The Rangers at Pointe du Hoc, led by LTC James Rudder, were forced to defend themselves for two days against vicious counterattack and from fratricide from naval gunfire and air support.  The Rangers held and were finally relieved by elements of the 29th Infantry coming from Omaha beach having retained their position but losing 60 percent of their 225 man element (there were 90 Rangers left capable of fighting after two days).

Today, Pointe du Hoc is a rather understated place with no museums or shops like you find at the other sites.  There is a sense of timelessness about the place.  Where development has encroached on to the other sites to various degrees, Pointe du Hoc still looks like it did on 06 June 1944.  The fortifications are still intact and the entire site is covered in deep shell-holes from 14 inch shells from the USS Texas.  As you stand at the edge of the cliffs and look down, it is hard to fathom how men climbed up them under fire and then attacked across the open ground towards the fortifications.  From the top of the fortifications you can look south towards the narrow outcropping of land and see where the German 914 Grenadiers counterattacked.  You can imagine the isolation that the Rangers with only sporadic communications back to the ships, backs to the cliffs and no reinforcements coming from that direction.

There was a lot of bravery to go around on D-Day and operationally, once the guns were destroyed the events on Pointe Du Hoc were insignificant in regards to the course of the campaign – the Germans were going to win or lose the fight at the main landing sites regardless of what happened after the guns were destroyed.  Still, it was one of those small but key events which could have meant success or failure of the greater operation.  If ever there was a place where I had to point out the bravery and tenacity of the American soldier, Pointe Du Hoc would be my example.

At the top of the lead fortification where the Rangers made their ascent, there lies a single monument.  It is not large and gaudy like the French monuments, angular and blocky like many of the American ones, or even dark and gothic like the few German ones you find.  Instead, it is a single simple monument with a rather plain inscription.  Given what had occurred here one of my trip companions thought there should have been a bigger monument but I think the one there is perfect.  It is probably the most beautiful single monument on any of the D-Day sites and it is a fitting testament to the valor shown by the Rangers on that date.