Let me be very deliberate, here’s what I am and I am not advocating. I advocate we give ourselves a chance to move on and create other relationships. I submit that if we give some folks in our community around us a chance, we might be surprised to learn that there are others who have also shared in the struggles of combat, the difficulties of trying to reintegrate into a society that is somehow different post war and we might, actually, have a few things in common. We also might find that there are civilians out there that don’t understand what we have been through as Rangers (or Soldiers), but care about us and sympathize all the same. We may find others who have shared experiences – or in some instances have skills or connections that will compliment what we are trying to accomplish, whether that be in our family, or in business. This is a hard thing to grasp, truly. You don’t have to be “understood” to be cared about. Period.

This might be the most important point to take away from this entire article. Understanding is not the foundation for relationship; vulnerability, trust and love are. I no more understand what my wife felt going through childbirth than she understands what taking a knee on a blacked out bird flaring on target feels like, but we still love each other. We still labor to compromise for each other every day. And no, it’s not all kittens and rainbows, but it is well worth it.

Here is what I am not advocating: relinquishing the special place that the Ranger Creed bored out of your big heart. Here’s a made up “number”: 99.9% of all Rangers I’ve ever met have more heart than most Americans out there. This is part of what makes us so special. You pained, sacrificed, bled and wept for the honor to call yourself Ranger; in no way do I advocate you relinquishing this great honor, I certainly do not. Between you and your Ranger Buddy, there is a very unique and special bond, a special blessing born of shared sacrifice and purpose. 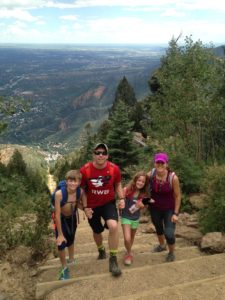 Here’s another thought, I am also not saying it’s easy. It’s not.

In 2004, Kelly came home from picking our son up at preschool and was so excited to inform me that she met a new friend. I calmly asked, “Are they a Regiment or 3/75 family?” The response, “neither.” This did not compute for Ranger Young, but we gave it a chance. I reluctantly engaged in this new friendship at first, which grew into a bond with some of our closest friends. Two years later, this civilian family was on the sidelines cheering me on at the Best Ranger Competition every step of the way. Zero Dark Thirty to Zero Dark Thirty, the entire weekend. They even hosted our going away party when we left Columbus, GA bound for Denver in 2011.

Here’s another bit of perspective to chew on. The average American life expectancy is nearly 90 years. The (average) 4-5 year experience as a Ranger in our 20’s has the ability to influence the rest of our lives, but it doesn’t need to solely define it. We have many more experiences ahead of us with many new people. These will be different, but they have the power to be another uniquely, special, different and defining experience if we give them a chance.

Consider that there are many who not only call themselves Ranger, but also Doctor, Lawyer, Father, Son, Author, CEO, and so on. Although we forget this much of the time, I will remind you that the creation of the Ranger Battalions was predicated on the fact that the Ranger will go out and make the Army a better place. I hope we endeavor to live our purpose in this context. Lord knows what America needs right now is stronger parents, better mentors, committed husbands and stronger community leaders. You will find that you are uniquely conditioned to provide all of these in your own backyard and, “set the example for others to follow” if you give it a chance.

As a guy who has spent his life laboring to see black and white in a world of greys, my point is this: it does not have to be one or the other. We can still cherish our place at the table in the halls of Ranger lore while also creating authentic relationships with others in our communities; we just have to give others (and ourselves) a chance.

Brandon Young is the Director of Development at Team Red, White and Blue. www.teamrwb.org.

Quick note: I know some of you will math the hell out of this to find a problem with it, let me save you the time, my advanced grasp on mathematics is limited to P = Plenty and Time = Distance/ Rate…I think? Stick with the message.

This first appeared in The Havok Journal November 20, 2014.