Much of the blame rests firmly on the shoulders of the Western (Modern) world. Exhausted from WWII, the modern world abandoned its colonies, and in a single minded effort to win the Cold War we created a welfare state of the undeveloped parts of the world. Then, when we had won this war, we simply walked away again, leaving the local peoples to fend for themselves in a world they were not prepared for and in most cases could not understand.

Meaning, we did virtually nothing to transfer business knowledge and develop local economic infrastructures or to impart the entrepreneurial and investor skills required of participating members of modernity, of globalization. For an example more relevant to the conflict my ODA is now a part of, we didn’t back Charlie Wilson, et al when the costs would have been almost infinitely less than this now eleven year war.

Understanding this led me to look to identify a possible solution, to identify those who were pursuing solutions and to see where there might be room for addition or refinement of these efforts. Having been a corporate executive, technology entrepreneur and investor, having previously served ten years in the Army, and having spent time with many a former Green Beret in the mountains of Idaho and Washington as a child and teenager, the answer seemed clear.

We needed to enhance and further enable the entrepreneurial spirit at the tactical level, right in those villages where the enemy was and is recruiting. And the force to do it, the force that was already in those villages, tasked with knowledge transfer, and more importantly, with relationship building, was SF. 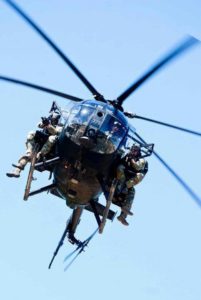 Regiment, a Regiment already stretched thin, already tasked with a large number of secondary specialties. As with any new business line I knew that if this capability was to be added it would have to firstly enhance existing efforts and utilize existing resources, and secondly would have to alleviate and directly address real-world, in-the-fight needs. And in pursuit of an understanding of how this might be added to the SF Curriculum and tasking and how it would be applied and realized on the ground to the support of the greater mission, some additional themes had to be further developed.

First, thriving economies do not come into existence as the result of centralized and top down conventional thinking and processes, or through large-scale wealth transfer, or in environments of pooled assets and wealth. The Mind of the System, of government, of Corporatism, strives to sustain the status quo and therefore works to control resources and growth, to pool assets and wealth, and to stifle the innovative capacities which are critical to creation and distribution of wealth across a population.

Second, an economy can only be created and sustained through the boundless energies and limitless creativity of the people living at the expansive, chaotic edges of a system, employing the Mind of the Disruptor to establish new assets and wealth. This means, though government and corporations are essential to absorbing and enabling the innovation and productivity at the edges, they are not the driving force of a healthy economy.

Fourth, the organization trained to employ the Mind of the System and the Mind of the Disruptor to promote stability and development in the most dangerous parts of the world is SF. Yet, though the members of the Regiment are skilled at governance and security, and many of the economic development resources have been put in place, Green Berets are lacking in the business and investing knowledge and experience essential to set the conditions for internally driven, sustainable local economic development.

When combined, these thoughts led to the realization SF could add Entrepreneur and Venture Capital training to its already extensive capacities with minimal investment and disruption.  And should such occur, the Green Beret’s mission of freeing the oppressed of the world would be greatly enhanced. So, at the age of forty one, and after a seventeen year break in service, I returned to the Army to serve as a Green Beret with the purpose to better understand how these capabilities could and should be added. And after completing the Special Forces Qualification Course, I drafted and put forward a proposal for the Economic Development Program which was provided to the Commandant of the Warrant Officer Institute and the Command Warrant for Special Forces.

Before we discuss how VC and Entrepreneur training would be added to the Regiment’s capabilities and practices, how the Economic Development Program would be structured, phased in and operated (which will be the topic for the third article), we must first fully understand the Mind of the System and the Mind of the Disruptor. This is due to the fact fostering capacity and stability in those underdeveloped parts of the world where SF operates requires a comfort employing both minds seamlessly. And the reason for this is the interplay between the two minds shapes every aspect of our existence and in particular the world of economics, finance and globalization.

The nature of a healthy and expanding System is that it is always composed of, challenged by and made possible through two intertwined yet quite distinct and conflicting minds. These are the Mind of the System and the Mind of the Disruptor, and though these two are at constant war, one without the other cannot long survive. This is because only the active conflict and mutually supportive nature of these two minds allows for asset creation, management and the constructive destruction, the cannibalization of investments, necessary to the sustainment and improvement of institutions, ecosystems and civilizations.

Neither of these minds can be taught but only refined, and their differences,  sometimes subtle and sometimes obvious, are always quite substantial, which is why the two are almost never resident within the same individual or organization. It is this, that the two minds exist together only within an extremely limited number of individuals and institutions, which makes it so difficult to intuitively grasp the role and purpose of each. However, if we are to understand the benefit and limitations of each and to know how they collectively create the world we live in we can begin by understanding the major differences.

The first, the Mind of the System, is an inwardly focused, defensive Mind seeking sustainability and growth by addressing Risk at the lowest energy expenditure possible. This results in:

The second, the Mind of the Disruptor, is an outwardly focused, offensive Mind which exploits inefficiencies to create new assets and wealth and to rapidly reach higher, sustainable systemic energy states. This results in:

An economic and financial analog for the Mind of the System is the Stock Market and the surrounding Investment Banking and Brokerage industries (Corporatism & Government – Regular) and their focus on publicly traded financial instruments (known entities with extensive operating histories and relationships). For the Mind of the Disruptor we can look to the Private Equity Market and in particular its Venture Capital and Seed & Angel investors (Start-up Companies & Special Forces – Irregular) which focus on new companies and financial instruments (unknown entities with limited operating histories and relationships).

Where the first is responsible for defense of and improvements in valuation of existing assets, the second is responsible for establishing and improving the valuation of new assets. The System works with known entities in well developed ecosystems, employing standards and best practices, while seeking marginal returns on large investments. The Disruptor works with unknown entities not yet part of an existing or emerging ecosystem, employing assets, resources and relationships in innovative new ways while seeking large returns on small investments.

A direct analog for the Special Forces Regiment would be the:

Mind of the System (Investment Bank) – Group & Battalion – employing doctrinal operations, resources, models and metrics to ensure sustainment and moderate expansion and return on investment in the overall Area of Responsibility;

Mind of the Disruptor (Venture Capital Fund) – Company & ODA – employing dynamic, situation and resource availability dependent operations, models and metrics to establish and expand stability and to realize substantial return on investment (sic, mission success) at lower input volumes and costs and with greatly accelerated rates of return in the Area of Operations.

The greatest strength of the Regiment and what once made ODAs unique in the world of military units and Special Operations Forces, was the fact the Green Beret historically encompassed both these minds. However, in the post Cold War Era, the era of the 18 Series Branch, the balance between the two has swung steadily towards the System. This trend has not abated. And the inevitable result of this progression, if allowed to continue, will ultimately be a rigid and static organization incapable of meeting its mandate of freeing the oppressed peoples of the world.

This is because, though still requiring Diplomatic, Information, Military. and Economic power, the War on Oppression is now almost solely about establishing conditions for local, micro economies to develop and expand, about integrating with the globalized world. And that is not something the Mind of the System is designed for. The System is not capable of the task because it is the nature of Systems to sustain themselves as they are, and a System which is appropriate for one is often times inappropriate for another. Meaning the only Mind capable of the task is that of the Disruptor, tempered with and enabled by the Mind of the System. This means that if we are to empower the next, increasingly globalized generation with the same potentials we must rebalance the collective SF mind.

Good news is the rebalancing of the SF Mind will not require a rewrite of who the Green Beret is or what he does and how he does it. Nor will it take much time or be a generational change. It does mean where we now mostly pay lip service to the importance of unconventional thinkers, we will have to early identify and promote those who possess and develop both the Mind of the System and the Mind of the Disruptor. And where we now spend freely (money, energy and blood)  with little or no thought to Return on Investment (second and third order effects) we must begin to think like Venture Capitalists and emphasize empowering the individual and realizing ROI at the very entry level and in the dangerous parts of the world.