HomeCultureWhat I Learned from Our “Terps” 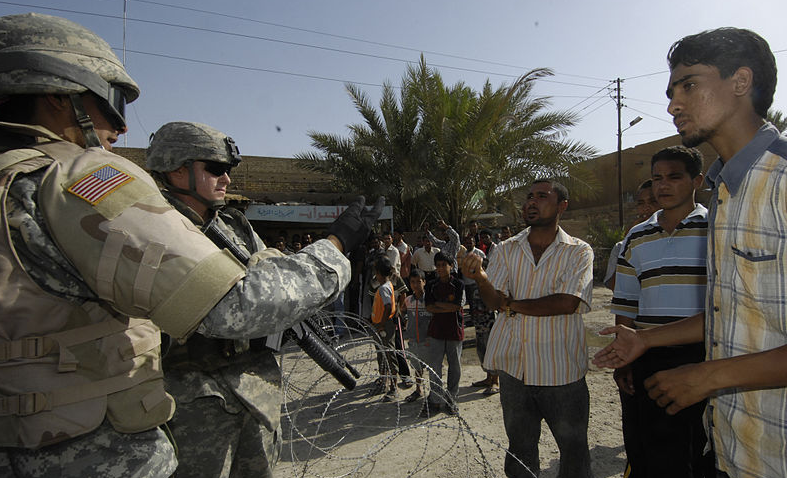 Behind almost every unit conducting a mission in the Middle East is one, or more, locals who love their country enough to risk their lives to support the mission at hand.

We all talk about how we would fight off anyone that enters our homeland. We talk about being so patriotic we’d fight until our last breath to protect what we call home. What we eventually ask though is, “Why aren’t there people like this in the middle east? Why are we there protecting them? Why aren’t there people like us, in those countries?” There are people like us, just they’re fighting in their own way. Not everyone is born to be a fighter, if you’ve been in the military long enough I’m sure you have seen your fair share of those people.

So, sometimes people must find other ways to support, and help their country. Your supply NCOs (how good or bad they may be) do their part, for example. You need to fight, so you need equipment, so they get you that equipment so you can go fight. I can ramble on about every “POG” position, but you get the point. So, who in the middle east isn’t a fighter but is still contributing? Translators, that’s who. Interpreters, terps for short, are among those people who fighting isn’t their thing, but they want their country to be great, and they will do whatever they can do to assist in that.

During my deployment to Iraq, I found myself in the position of “Terp Manager” which just meant keep up to date with them and have them where they need to be at the right time. If there were paperwork and admin events to be done, I’d take care of that too. What that job ended up doing was helping me get closer with my terps and understanding them, and their role, in the war. We worked with a few, but there were four main ones that we got close with. For their sake, I’m going to use nicknames to further help mask their identity even though they already had nicknames.

Before I get into describing our terps, I want to say this: these guys were some of the best people I have ever had the pleasure to surround myself with. All of them will always be welcomed to my house, and I sincerely mean it. They put their lives in danger, and their family’s lives, all to help make their country better. They weren’t able to just pick up a weapon and charge ISIS, that’d be stupid, and they knew it. So, they chose to support the coalition forces by working as a translator. They were amazing at their job and were always raising their hand to go out on missions that would take them away from home and have them sleeping in bunkers beside us. They hated ISIS and were ready to see them be crushed by us. Plus, these guys would always invite us for chai or bring us local food to give us feasts, and they would never let us clean up after it. Just very down-to-earth good people.

So, first was Kris. Kris and I connected right off the bat with our love for heavy metal. Talking about bands I didn’t even think Iraq had heard of (I was ignorant at the time towards their culture) and that he was also my age. Funny, always dressed well, and took care of his hair more than me, and I thought I was bad. He was also caring, he was so quick to check on me after I cut my ear (different story) and had tons of blood on my uniform. He was genuinely concerned about my health, and not just me, but my whole team. Kris was eager to leave Iraq, whether to America or to see his sweetheart in Sweden…if he reads this he’ll get it.

Next is Alex. Alex was a very soft-spoken guy, and extremely polite. He was funny if you got him going on the right topic, but the majority of the time he was just ready to work. Alex had a bunch of family issues, both his daughters had medical problems, and his wife was very sick. But guess who still showed up to work on time, ready to work a full day? And if he needed time to tend to his family, he was very quiet about asking to leave early/have a day off. Another, genuine human being, with a good heart. He really did not like Iraq, and he would ask questions about America a lot and you could see in his eyes how badly he wanted to get there. Not just for him and to leave this country, but to get his family the medical care they needed. I always think about him and his family, and I hope they get everything they needed because he worked more than enough to earn it.

My boy Will, a big guy with a bigger heart. One of the main terps who would get excited to bring us food, having his family cook a bunch of different meals for us. He was hilarious and often wasn’t serious, but we needed that. I watched him take his watch off his wrist and hand it directly to our private. Yeah, he admitted the watch only cost twenty American dollars, but still, it’s the thought that counts. If we ever needed backup while working with the Iraqi army he was sure to put his foot down. Often yelling at them before we could even point out what’s wrong. You can also credit him and Kris for the majority of the curse words we learned in Arabic.

And last, but not least, Harry. This guy, like the rest, was amazing. Very funny, and again, dressed very well, always. Highly respectful and a down-to-earth guy. We, obviously, never got to drink with him but he would tell us about all the drinking he would do while he wasn’t on the post, and this dude could seriously slam them back. We often told him that he needs to come to the US to drink with us, and I would love for that day to happen. He also was the biggest for pushing to do “real mission shit” as he would call it. Yes, like the others, he wanted to move away, but they all still wanted to see their people safe.

Now you know a quick background on each, and I promise I could go on forever about them all, but what I want to get to is what they taught me. Other than the curse words, and few useful words in Arabic, in some weird way they showed me what life was about and opened my eyes to my own life in America. These guys, regular everyday people, stood up to help fight terror. They did it for millions of people they didn’t know. And for a country that they all would love to not have been in.

Through talking with them and their questions and comments on American life they showed me what was important. No one should care about Kim Kardashian’s magazine cover, or what Justin Beiber ate for breakfast, which I’m sure most people would agree with. What everyone should care about is the quality of life that they are currently living. They often commented on protests and other things happening in the US at the time. They would comment on how we had it so good, and ask why were Americans in such a heated battle between themselves when they have the privilege to live in America? “Why complain? You have it made.”

This lead to me digging deep and thinking if I had overlooked how good we have it, and hell yes I did. My downtime at home was spent laying around the house and watching Netflix. Somehow I’d still find things to complain about though. These guys, even in a war-torn country, would do something every week that was worth talking about, and I rarely heard them complain. We’d send them on a week break while we reset, and they would come back with some funny stories about the nights they had.

Harry, looking through his Facebook, looks like he had lived a better life than I had up to that point. After our long talks, I quickly realized whenever I would get home, I was going to make the most of the time with my wife. Every day we would make a new memory, big or small. Everyday remembering how good we have it. They always asked if I had been here, or done that, and the majority of the time answered me with a no. I decided that I needed to change that. I needed to start living my life and to start loving my country more.

I wish everyone could grasp this outlook, whether they pick it up on their own, or they need to meet guys like my terps to get it. I want every American to take a step back and see what they have, and be thankful for it.