I think that realizing all of this changed the way I perceived things and lived my life and therefore affected the way that I felt when I was shot. After the first deployment I tried to make the most out of my relationships. I tried to tell people I loved them more and let them know how much they meant to me. I tried to not take my faith for granted and took opportunities to grow in my faith and share it with others. When I deployed back to Afghanistan I tried to make each phone call, e-mail and Facebook message count.

This is the reason why I think that the second time that I thought I was going to die was different from the first. I had told my wife how much she meant to me, how much I loved my parents and told my brothers that they were my best friends. I did not take my faith for granted and participated in our base’s group Bible study. I lived my life knowing that death was a great possibility. When I was on death’s doorstep, I did not experience the panic, terror and regret from the first time; because the second time around, I was ready to die. The second brush with death re-affirmed all the lessons that I learned the first time and showed me even more how precious life is. It is never to late to do the right thing. If you aren’t living your life the way you want to, change it right now. Live your life the way that you know you are supposed to so that when it is your time you can die peacefully with no regrets.

In the pre-dawn hours of September 25, 2011 my Special Forces Team and partner force the Afghan Commandos embarked on a clearing operation in the mountains of northwest Afghanistan. Within an hour, we stumbled upon a hornet’s nest. Our force was subjected to continuous machine-gun, sniper, and RPG fire as we advanced through the valley. In the tenth hour of the firefight, I was on a roof providing fire support for maneuvering elements and identifying enemy positions. As rounds impacted within inches of the Commandos and myself, I told the Commandos, “if we do not get off of this roof, we are going to get shot.” The Commandos and I quickly climbed down the ladder; I intended to re-organize my fighting force and continue to push forward to eliminate enemy positions. I started moving from the rear of the house to the front to re-organize my squad and when I reached the front corner of the building, it happened.

The pain pierced through my stomach, hip, and leg, I felt like I had been hit in the stomach with a sledgehammer. The gunshot sent me to the ground, throwing my helmet, headphones and gun in separate directions. Within seconds I realized that I had been shot, I tried to stay calm and conscious. I crawled to my headphones and radioed to my teammates for help. I heard a voice on the other side that said “say again,” (I found out later that he was confused because I did not sound like someone who had just been shot). I once again repeated my call sign, location and situation. I began treating myself but realized that there was nothing that I would be able to do; the gunshot-wound wound was to my lower abdomen. What seemed like three years went by (only a few minutes), I radioed again that I had been shot, this time with urgency and fear in my voice. Then an Afghan Commando dragged me from the open area to safety.

Under intense enemy fire, my teammates moved to my position. The first American to me put pressure on the gunshot wound, the second demanded to see the wound, and the third was my medic. A crew of Americans treated me, while my Captain called in for a medical evacuation. My teammates assured me that I was going to be OK. I knew the truth; it was up in the air if I was going to survive. I had so many close calls before; I thought that my number was finally up. A group of Americans and Afghans carried me on a stretcher through an open field, up and over walls, and through the maze that is an Afghan village, the whole time they received and returned fire until we reached the helicopter-landing zone (I owe much gratitude to my teammates and Afghan partners for risking their lives to save mine). 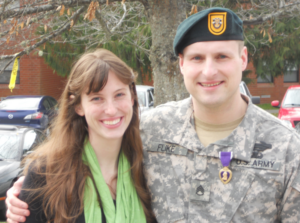 Before I was loaded into the helicopter, teammates told me they loved me. I was certain that I was going to die. The helicopter ride seemed short; the pain drugs had set in. After landing, I was quickly unloaded and brought into the surgery tent. The surgeon talked to me while his attendants cut off my uniform. The surgeon asked me if I had any requests, I asked him to save the bullet if he could and to have a Catholic Priest give me my Last Rites. I was convinced I was going to die.

Three days later I woke up in Landstuhl Medical Center in Germany. Waking up in Germany was by far the most terrifying experience in my life. I did not know if I was dead or alive, in Heaven or Hell, or where I was. To make matters worse, I did not recognize anyone and also did not see anyone in a US military uniform. I did not see any Caucasian personnel; everyone, including my nurse, had a darker complexion. The pain, the medicine and the disorientation made me think that the field hospital that I had been transported to had been over run by the Taliban. I began to scream for help when I finally saw someone in a US Army uniform. I hope that no one else ever feels as scared and terrified as I was.

I was stunned one morning when a physical therapist told me that he wanted me to sit up; every part of my body was in pain and I barely possessed the strength to lift my head (I was still in intensive care). The therapist explained to me that the sooner I started to move, the quicker my recovery would be. I had never given up in my life; this would not be the first time. With help from the therapist, I sat up in bed. I have marched 30 miles with a 45-pound rucksack and traversed the mountains of Afghanistan for days on end; sitting up in bed was by far the most physically challenging thing I had done in my life.

The feeling that ran through my body was one of joy, pain and accomplishment. I also realized that I had just taken my first step in the road to recovery. If you haven’t taken your first step in your road to recovery, whether it is physical therapy or seeking mental health, I encourage you to do this. If you do not know how or where to do this, asking others for help is a great way to start.