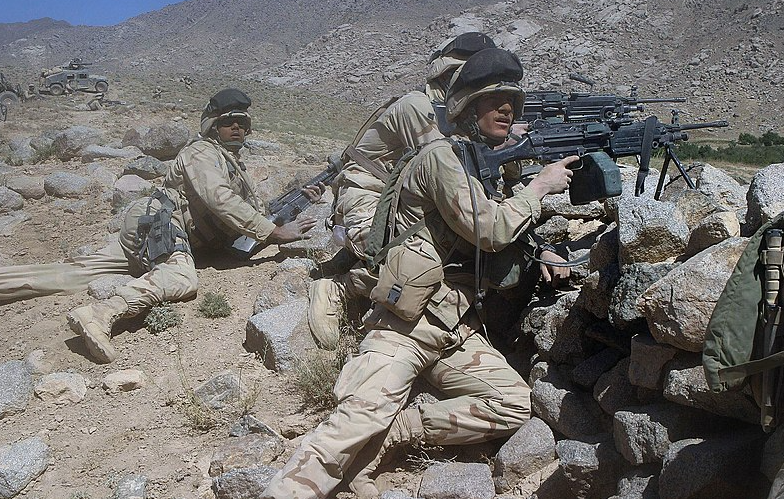 A surprise mandatory meeting was held for all the female service members, officers, and enlisted alike, already deployed with the 22nd Marine Expeditionary Unit (MEU) after arriving in Afghanistan.

The objective was made clear; the MEU had come up with a spur-of-the-moment idea. They were going to use “female searchers” to win the locals’ hearts & minds by obeying the Muslim customs and courtesies regarding Afghan women while simultaneously looking for weapons, intelligence, and countering the Taliban.

What could go wrong with an arrangement like that?

None of the women assembled in the tent had a choice. The MEU needed bodies with tits and lady bits to make their idea bloom and bear fruit. Besides, like the men, the women gave up their right to refuse when they joined the service, too, so their lives were equally forfeit to those in power to use, abuse, or throw away as they see fit.

Being voluntold is the pits.

Marines or sailors, it didn’t matter who got picked. All the women with the 22nd MEU were scrutinized by those authorized to make operational decisions. However, only twelve females initially got selected, and then they were divvied into the various tactical elements.

After a quick run-through of how to search a body from head to foot, using the credit card swipe and back of the hand method, the female searchers were deemed ready to be embedded with 1st Battalion, 6th Marines (BLT 1/6) and got flown out to the drop zone and placed right into the thick of it.

That’s all the training or information that the female searchers had been given for the mission. The women thought further instructions would be forthcoming once the coalition forces figured out their interoperability. Understandably, but unfortunately, the women were an unknown liability for the squads and company, so they never fully integrated into the ground combat units as the superiors wanted.

Regardless, the days passed, and the female searchers did their new jobs accordingly, but they continued to function in the dark, both literally and figuratively.

Between continuous night and day movements covering miles of rough-mountainous terrain by convoy or by foot while dealing with the insurgent’s guerrilla warfare tactics, the female searchers struggled to cope with their fear while keeping pace with the goings-on around them.

Not only that, but the promised ten-day OP turned into weeks without an end in sight. As a result, feminine hygiene products had to be radioed in for the first time in the Marine Corps’ history. Menstruation became an unexpected troop problem never before faced by an infantry battalion to date.

Some women were not ready to mentally or physically handle the toll that the assigned task took on them. Consequently, complaints surfaced as well as accusations of mistreatment.

The Command Element was quick to intervene. Half the women immediately got pulled off the line and got sent back to Kandahar for an incident report to be written.

Only the bare minimum number of female searchers remained behind on the frontlines to maintain operational effectiveness, which enabled the infantry to continue to do their due diligence during the cordon and search battlefield operations concerning the Afghan women.

The men did not appreciate what was said about them, especially considering that they had been on their best behavior up until then. Which no longer became the case after that. The grunts ensured that the remaining female searchers answered for the actions and slanderous words that their female counterparts had made to incur their rage. Justified or not, that’s just the way it is. Actions have consequences, and someone always has to pay for their mistakes.

Being hated was draining, and so was the intense heat. When the grunts passed out from heatstroke or dehydration, their animosity wouldn’t even allow them to accept help from the female corpsman trying to give them an IV. It was heartbreaking to watch the men put their health in jeopardy to avoid her touch or aid.

All the women could do was take it on the chin and not complain. They would have to prove themselves and earn the men’s trust back as they climbed the same mountains, searched the same compounds, slept in the same goat shit, endured the same weather conditions, and faced the same enemy when bullets fell like rain around them.

Despite all the hiccups and bumps in the road, the females proved their worth over time. It helped smooth things over, too, when the women did not freak out when the convoy got ambushed or when the patrols came under direct fire. That was no easy feat when the enemy had them pinned down, and air support wasn’t available for immediate relief, which feels like an eternity when everyone wondered if they would return home alive and in one piece.

At the end, when it was all said and done, the MEU suffered minimal losses while completing its objectives in the war against terrorism. Thanks to many tactical innovations, including embedding female searchers with ground combat units in Afghanistan long before Female Engagement Teams (FET) became recognized in 2005 for doing the same thing.

Operation Mountain Storm was a once-in-a-lifetime experience that revealed many military and personal strengths and weaknesses. It is safe to say that it will also live on in the female searchers’ memories long after their combat successes fade from society’s unofficial archives because something extraordinary like that never gets forgotten by the ones that lived through the hardships.

This first appeared in The Havok Journal on November 12, 2020.

Lori Butierries is a full-time caregiver to two children with special needs, one child being terminally ill and physically disabled. She uses her life experiences and the medical knowledge that she acquired from serving as a Hospital Corpsman in the United States Navy to help others facing similar hardships. Lori focuses primarily on advocating for and educating others about the special needs, mental health, and veterans communities. Her long-term goal is to reduce the stigma associated with disability by talking about it with people of all ages, thus minimizing the fear and the mystery attributed to the unknown.