For other excellent opinion and analysis on this and many other related topics, check out the Modern War Institute’s main page by clicking on their logo below.

In 2013, David Kilcullen, an advisor to Gen. David Petraeus during the Iraq War, was asked how the US military reduced violence in Baghdad by 95 percent. “We did it by killing the city,” he responded. “We shut the city down. We brought in more than 100 kilometers of concrete T-wall. We put troops on every street corner.” The US military’s counterinsurgency campaign—and the concrete barriers that were an integral part of it—certainly brought impressive, measurable short-term improvements to the security situation in Baghdad.

However, by 2014, just after Kilcullen’s explanation, civilian deaths in Iraq had returned to 2006–2007 levels. The concrete barriers emplaced during the “surge” dramatically slowed sectarian violence—for a time—but also cemented the sectarian and ethnic divisions that empowered Prime Minister Nouri al-Maliki’s power grab, contributed to government corruption, and set the conditions for the rise of ISIS. These same divisions will threaten Iraq long after ISIS is defeated if a political solution that incorporates and adequately represents all sects and ethnicities is not further developed.

Population-centric counterinsurgency primarily emphasizes securing the population instead of targeting the enemy and seeks to reinforce the legitimacy of the government while reducing insurgent influence. While US COIN efforts produced an array of tactical successes, the overall result cannot be construed as a total success. This is not a reflection of US service members, their efforts, or their sacrifices, but rather a function of the ambiguity typical of a COIN mission, time constraints, and poor quantitative metrics with which to assess mission progress.

While policy debates take place at the strategic level, stop-gap measures and temporary solutions are constantly tried and tested in a process of tactical innovation that attempts to compensate for strategic challenges. However, what appear to be militarily successful tactical innovations can inadvertently compound strategic failures and erode progress toward a political objective. The widespread employment of concrete on the streets of Baghdad offers an illustrative example.

In his MWI article, “The Most Effective Weapon on the Modern Battlefield is Concrete,” Maj. John Spencer argues that “concrete contributed to reducing the complexity of the urban environment, served as a major tool in establishing stability, and functioned as a powerful weapon against enemies using safe havens within the city.” He further claims that “no other weapon or technology has done more to contribute to achieving strategic goals of providing security, protecting populations, establishing stability, and eliminating terrorist threats.” Maj. Spencer’s treatment of concrete as an effective tactical tool has merit, but his claims insufficiently consider the classical Clausewitzian maxim that war is a “continuation of political intercourse, with the addition of other means.”

Portraying this tactical tool as a weapon of undue strategic influence on the battlefield fails to take into consideration the strategic implications that concrete walls have on a counterinsurgency campaign, specifically their long-term destabilizing effect on the host nation that the COIN campaign is meant to assist. Looking beyond the case of Baghdad that Spencer highlights, other examples—namely Jerusalem and Northern Ireland—discourage using concrete walls, as they create physical and mental barriers that affect reconciliation efforts and produce an “us vs. them” mentality among the population. While concrete barriers did help to halt the descent into sectarian civil war in Iraq, the US Army did not mitigate the ensuing political and reconciliatory risks that accompanied our use of concrete. 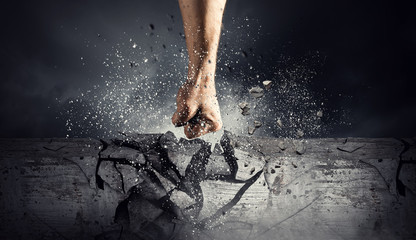 For military planners, the appeal of concrete barriers during an urban COIN campaign is clear. In Iraq, they allowed the military to freeze a sectarian civil war by isolating insurgents from the population and limiting the movements of combatants and supplies. This reduced both insurgent attacks and civilian deaths, which in turn contributed to the “clear, hold, build” concept employed during the 2007–2009 surge and proved that concrete barriers can have measurable short-term military utility.

But such barriers also have real and longer-term impacts on the population. This is especially true in cities (where, naturally, they were most widely employed). This is because of some of the city’s most defining characteristics: regular encounters with strangers, the freedom of anonymity, and the potential for political action. By putting up barricades, the military removes easy access for residents to visit family members in other quarters of the city, discourages large multi-ethnic or multi-cultural bazaars, and exacerbates sectarian attitudes in the minds of the inhabitants of the city.

Barrier emplacement addresses sectarian violence in the short term, but also ends up worsening sectarian divides, which can lead to longer-term acrimony between differing sections of the city. It also induces major self-segregation, creating a balkanization that dramatically reduces the prospect of fostering peaceful communities in the future. Understanding the tools of a COIN campaign and their impact on a population is vital for military planners.

Gen. Raymond Odierno’s guidance to troops during the surge was: (1) protect and serve the population; (2) understand the complexity of the conflict; (3) give the people justice and honor; (4) foster Iraqi government legitimacy; and (5) promote reconciliation. Concrete barriers can be an effective means of implementing aspects of this guidance—protecting the population, for example. But military planners should look strategically at concrete barriers and ask questions about how they align with other parts of the guidance: How do they affect relationships among disparate segments of the population, and between the state and population? Do sectarian enclaves created by concrete barriers hinder reconciliation? How do they affect internal state and community political dynamics and what does that do to our goal of fostering a legitimate Iraqi government?

A strong case can be made that concrete barriers allowed al-Maliki to consolidate power and ignore sectarian and political rivals. All the requirements for a successful COIN campaign, at least as emphasized by our own doctrine, are dependent on the creation of a functional state and fostering that state’s legitimacy in the eyes of the population. Creating “gated communities” separates different sectarian groups, which reinforces sectarian difference as a basis for electoral politics. Understanding and facilitating relationships between sectarian populations that we are protecting will greatly aid our ability to encourage reconciliation and contribute to the success of the counterinsurgency campaign.

As the US Army began to relearn COIN following the outbreak of a major Iraqi insurgency in 2004, it incorporated lessons from Israel’s efforts in the West Bank and Gaza Strip. While most lessons, such as those on urban combat, expanded our ability to disrupt al-Qaeda in Iraq, others—particularly those rooted in counterterrorism practices—have not yielded progress toward a political solution, for either the United States or Israel.

A brief analysis of Jerusalem offers insight into the long-term detrimental impacts of barriers as a security tool. Evidence supports the conclusion that walls like the ones Israel began building from 2000 to 2005, especially the thirty-two miles around Jerusalem, contributed immensely to improving the short-term security situation in Israel. Terrorist attacks declined by ninety percent. But once the wall was completed, domestic issues began to reassert themselves as those of most paramount importance to Israeli citizens, displacing the threat posed by the conflict, and the need for a political solution to address security threats became less pressing. The political cost of concrete walls in Israel was thus the stagnation of the peace process.