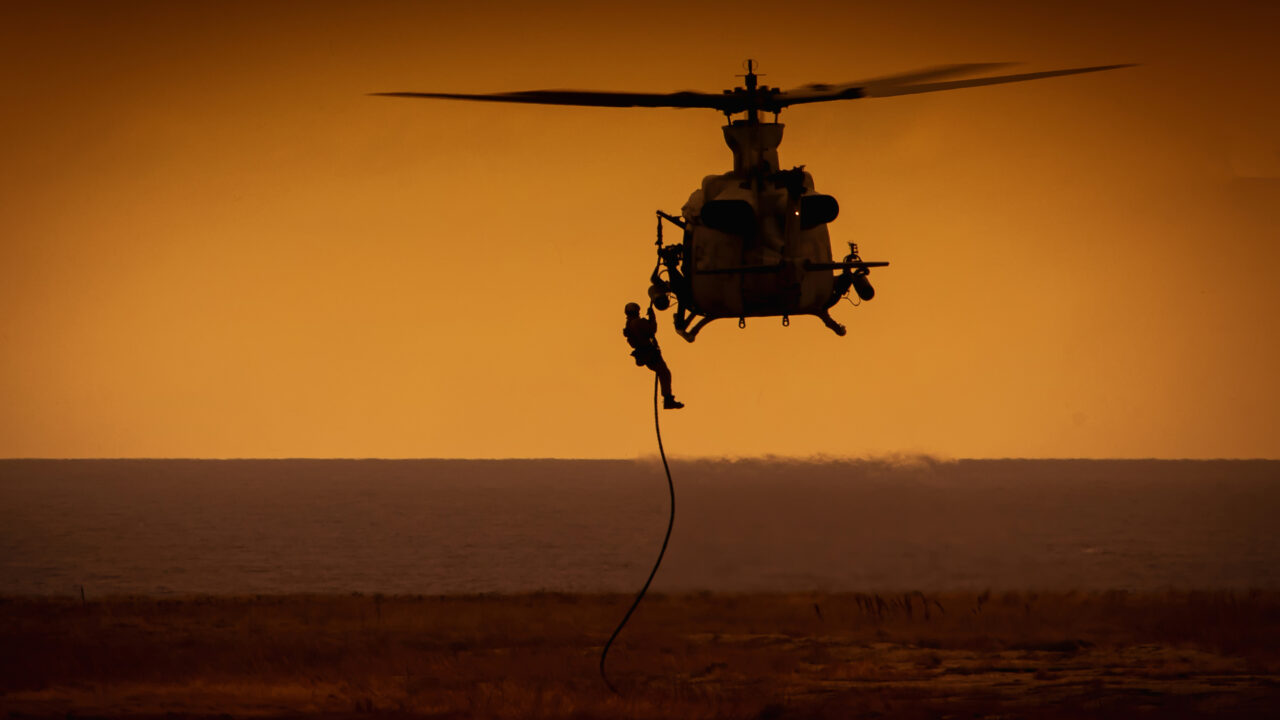 This first appeared in Frank’s blog on October 23, 2021, and in The Havok Journal on October 27, 2021. It is republished here with the author’s permission.

I was sitting with my son, Hans. He was telling me about going to Air Assault School. He was injured near the end of the class, so he didn’t get his wings. The school was willing to let him graduate if he took the entire course again. Hans declined that generous offer. He wasn’t going through all that shit a second time.

Hans looked off into the distance and said, “Yeah, Dad, it’s no fun rappelling from a helicopter and running out of rope at the end.”

I replied, “I imagine not.”

Hans took a drag and his cigarette, and said, “It helps if the pilots maintain their altitude.”

I never rappelled out of an aircraft, although I did learn how to rappel. I was at Fort Greeley, Alaska, in the summer of 1978 for training. I was taught how to rappel down a cliff. The goal was to feed the rope and bounce all the way down to the bottom. The instructors made it clear that I had to keep my body bent at the waist to avoid doing a face plant on the rocks. I managed to make it down the stone wall safely.

Years later, when I was an Army aviator, I flew at least one rappel mission with the infantry. It was boring. We picked up a load of troops, flew a short way to a flat and open area, came to a high hover, and then let the soldiers slide down their ropes. We flew back to the pickup zone, grabbed some more troops, and let them rappel. We went through this cycle repeatedly.

The only difficult thing about the rappel mission was keeping the helicopter steady while hovering. There is a tendency to drift a bit. I had to pick up a couple of reference points on the ground and keep them in the same location relative to the windshield of the aircraft. I also had to keep checking the radar altimeter to make sure I wasn’t going any higher. As Hans pointed out to me, it kind of sucks when the helicopter is flying higher than the length of the rappel rope.

It was important for the troops to rappel off the helicopter from each side simultaneously. If only one soldier jumped off the edge of the aircraft, that radically changed the weight and balance of the aircraft and created an unpleasant rocking motion. Most people on board found that disturbing. It was best for two guys to go out at once.

I know that I said that I found the rappel mission to be boring. Boring is not always a bad thing. Excitement is overrated. I was on another flight early on in my flying career that wasn’t boring at all. I wish it had been.

I had only been in West Germany for a few months. I was stationed at Fliegerhorst Army Airfield near Hanau, an industrial suburb of Frankfurt. An instructor pilot took me for my night orientation flight. I think it was in February, and the winter weather in Germany is kind of sketchy. There is often fog or freezing rain. We went for a weather briefing with an Air Force meteorologist, and the forecast was “skoash.” I don’t know if “skoash” is a real word (or if I spelled it right), but for us, it meant low clouds and poor visibility. We were legal to do the orientation ride, but it was a little iffy at night.

I never liked flying at night and we were going to fly VFR (Visual Flight Rules), which meant we had to use outside landmarks (lights) to orient ourselves during the trip. That was always tricky. During night flights we usually tuned in radio beacons (e.g. VORs) to keep track of our location. Frankfurt is an extremely high-traffic area for planes. Getting lost is a really bad idea.

We flew mostly along the Main River. That was easy. The Main was a twisting piece of ebony below us, bounded on both sides by the bright lights of Frankfurt and its surrounding urban areas. We went our merry way. The instructor pilot pointed out different reference points. I was at the controls.

IMC is not a big issue if the pilot has planned for it. We were all trained to fly using the instruments in the cockpit (e.g. attitude indicator, altimeter, airspeed indicator, compass, etc.). The problem is when the pilot is flying using outside references, and then these markers disappear. Then the pilot has to immediately change over to his or her instruments, and this is a bit disconcerting. The pilot’s asshole tends to pucker up as they try to get their bearings in a completely new way. There is a moment or two when mortality seems very real and very close. After that, the pilot either has the aircraft back under control, or bad things happen quickly.

We got it under control, and we sent an emergency transponder signal to ATC (Air Traffic Control). ATC really hates that. An emergency signal gets their attention and tends to make them lose track of the tin they trying to push, airliners, and such. ATC told us quickly and convincingly to turn off that signal, and then they gave us brief and succinct instructions to take us back to Fliegerhorst. Their message was basically, “We’re busy. Go away. Don’t come back.”

We were okay with that.