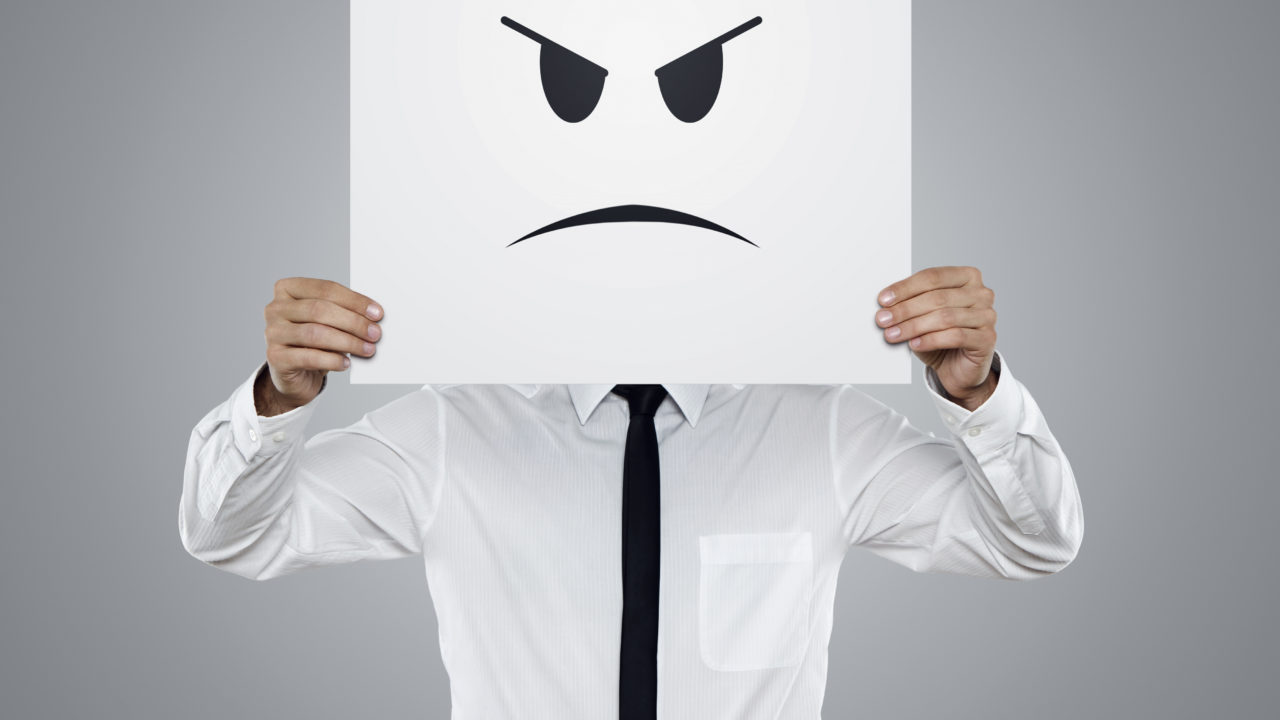 Folks, if you wanted to create a military veteran persona to exploit on social media, what would you drop into the mix? Based on precedent, I’d guess it you’d create a white male, in his late 20s or early 30s, bearded and heavily tattooed, with something loud, funny, and/or controversial to say. You’d dress him in a Ranger Up t-shirt, put a gun on his hands and an “operator hat” on his head, and drape him with a metric ton of ‘Merica. That sounds pretty good to me. Veterans like me LOVE that kind of stuff. America as a whole can’t get enough of it.

If you did it right you’d probably end up with something like Mat Best or Adam Calhoun.  Let me back up and say if you did it “half right,” because one half of the pair I just mentioned is not a military veteran…although he appears to like to play one on TV.

Just to eliminate any confusion, Mat Best is the real deal; former Army Ranger and combat veteran. He’s an example of a “highly functional” veteran and a role model for the Veteran Community.  And Adam Calhoun…well, he isn’t. I know that looking at a picture of him doing his thing, it would be easy to confuse him for just another  angry, loud, unkempt vet. He wears “veteran stuff.” He carries, says, and does things that are typical of a veteran.  He has the stereotypical veteran look. He’s promoted by a legit veteran-themed company. Here’s a picture of him in his (carefully staged) natural environment, complete with a scary-looking gun and a shirt that talks about SACRIFICE flanked on the sleeves by crossed rifles he never wore, and a “combat flag” he never bore: 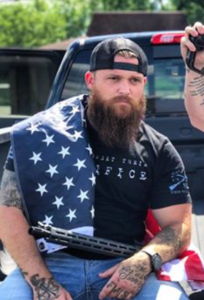 The first time I saw one of his videos, I assumed, like most people would, that Adam Calhoun was just another in a long line of veterans playing up their “dysfunctional” status for the camera and for the page clicks. He has created quite a name for himself within the Veteran Community and has made some wildly popular videos. You can check them on out on his Facebook page. But while many people operating in the veteran-themed social media space make their videos light-hearted or positive, Adam Calhoun…well, he doesn’t. You see, Adam likes to attack people, whether they be people who years ago took a picture he suddenly decided he didn’t like, or his son’s “gayboy” friends, or a 10-year-old boy who decided he wanted to create a makeup tutorial video.

So what do I care about Adam Calhoun’s videos? Plenty of Americans have beards and tats and love guns and America. None of that is “owned” by military veterans. If I don’t like his videos, I can (and do) scroll right on past them when they pop up in my Facebook feed. But if Adam can fool legit veterans into thinking he’s one of us, what is the rest of America going to think? You’ve got it, they’re going to think he’s a vet. And they do. Here’s the problem with that:  his antics are making the Veteran Community look bad. Going after vulnerable people because of their cultural norms or perceived sexuality or simply because they’re different from us isn’t the kind of thing we tolerate in our military, and it shouldn’t be the kind of thing we tolerate in the Veteran Community.  We’re better than this. We should stomp that kind of thing out within our own ranks, and we definitely shouldn’t put up with it from an outsider.  And Adam Calhoun, well, he’s an outsider.

I normally don’t get involved in calling out other veterans or wanna-be veterans over things like this, because I don’t like to help make stupid people famous. Besides, our friends over at Task and Purpose already did a great job of calling him out on his ill-conceived rants and his non-veteran status. But I felt like the negative attention he’s bringing to legitimate veterans warranted a response from us. After conferring with a number of other veterans, one thing is clear: if Adam Calhoun isn’t a poser per se, the consensus is that he’s at least a Stolen Valor window shopper: mad at the world, and I think I know why… 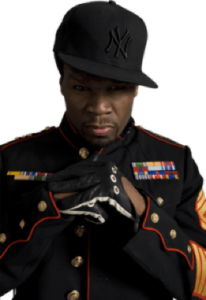 That picture of “gangster rapper” 50 Cent made me think of something: remember that first photo we posted in this article, the one of Adam in his veteran costume with a gun across his leg? Pretty gangster right? But isn’t there a thing about firearms and people who get in trouble with the law? How many of those guns he’s posing with are actually Adam’s, or are they, like those “HOLD FAST” knuckle tattoos, merely props to mislead his audience?

Let me ask you another question: what do you call a grown man who adopts the trappings of the military lifestyle, works hard to make people think he’s a veteran, and cashes in on that perception? Well, where I’m from, we call that kind of person a poser.

In our seminal Havok Journal article on military posers, we give the following definition: “A military poser is someone who, through fabrication, exaggeration, omission, or lack of correction creates or allows to be created an incorrect perception of his or her military service status. Simply put, if reasonable people think you are representing yourself as someone or something you are not, then you’re a poser. Period.” Under that definition, if Adam isn’t an outright military poser, he’s on the spectrum. Again, our article: “There are four general categories of military posers. On the scale of hardest to easiest to detect, you have the “elite fabricators,” then “the exaggerators,” followed by the “let you assume-ers,” and finally the “outright inventors.”

Adam Calhoun may very well be a “let you assume-er,” someone who doesn’t outright claim veteran status but gets a lot of mileage out of people assuming he is. If “cultural appropriation” were a thing in the Veteran Community, he would be Exhibit A, someone who wasn’t fit to wear the uniform but wants to LARP the Veteran Lifestyle. I guess I shouldn’t be too hard on the guy; apparently he “almost” joined the military, but a medical condition (and a criminal record) scotched those dreams. But why go through the trouble of actually being a veteran, when you can just let people assume you are? 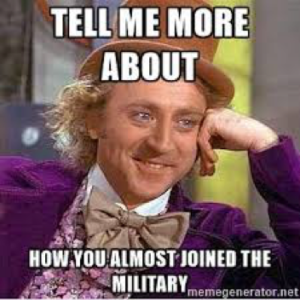 Now, full disclosure: Adam Calhoun has from time to time made posts admitting to the fact that he’s not a veteran. But that doesn’t keep him from deliberately keeping up the facade. This isn’t a case of Stolen Valor; it’s much more subtle. And that makes it that much more disturbing. 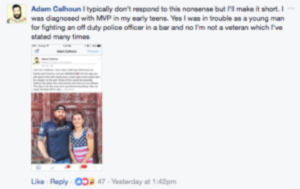 I’m more troubled by people like Adam than I am by the people he rails against. Even if you set aside the potential poser persona, you still have the platform and the message. Adam’s social media following and organizational backing give him a lot of power. When you’re in a position of power, like Adam now is, you punch up, not down. Don’t attack a little kid or other members of our society. And don’t do it under cover as an almost-veteran.

I’m also deeply disturbed by Adam’s reaction to getting called out by Internet personality Hasan Piker. Piker, as many already know, is a TV and social media personality perhaps best known for being one of the “Young Turks.” In a recent video, Hasan called Adam to account for his on-screen antics. And he must have really, really struck a nerve.

In a world where “any publicity is good publicity,” Adam should have rejoiced at the attention that Hasan’s article brought to him and his work. Hundreds, and perhaps thousands, of Hasan Piker’s fans who would otherwise never have heard of Adam Calhoun are now going to go click on Adam’s videos simply because of what Hasan had to say about him. Adam’s own fans are going to rally to his defense, which will also drive up his numbers. If I was Adam, I’d watch Hasan’s video and laugh all the way to the bank. But you see, Adam didn’t do that. Instead, he rallied an Internet lynch mob and set them loose on Hasan. He encouraged them to take offensive pictures of themselves and send them to Hasan. OK fine, troll to your heart’s content. But he had to take it further.

I guess encouraging his fans (including some members of the military, in uniform) to take pictures of themselves “wiping their ass with Hasan Piker” or sending “fuck you Hasan Piker” snaps or disparaging his heritage in video clips wasn’t enough. Things took an ominous, and decidedly unfunny, turn when Adam began threatening Hasan physically and may have even intimated threats to Hasan’s family.

I don’t know Adam Calhoun and I don’t know Hasan Piker, although I got in contact with Hasan for this article after another veteran tipped me off to the situation. While it’s safe to say that Hasan and I are probably miles apart politically, if I’m forced to take sides in this dispute I know who I’m not siding with.

I’m not siding with someone who attacks little kids or feels threatened by someone else’s sexuality or gender or politics. I’m not siding with someone who uses his influence to spur current members of the military to wear their uniforms while they take pictures of themselves doing things that could, and probably will, get them into a whole lot of trouble with the UCMJ (do you want another Marines United? That’s how you idiots get another Marines United).

In short, I’m not siding with a guy who pretends to be like me, but who couldn’t be further from it. And neither should you.

Like I said, I don’t know Adam Calhoun or Hasan Piker. In this or any dispute, I’m siding with who I always side with:  the Veteran Community. Rewarding and glorifying the kind of behavior that makes Adam Calhoun famous is bad for us, the Veteran Community, and it’s bad for our country. Stop making stupid people famous. Stop letting people borrow the trappings of our community and using it to lead our members astray. Stop rewarding people who use their platforms to spread anger, hate, and divisiveness. There’s enough of that in our country already.

Bullying children? Bigotry? Threatening peoples’ families? Motivating young troops to do things that cause them to run afoul of the UCMJ? That is some weak-ass shit right there. That’s something that I hope no veteran personality would ever do. But then…Adam Calhoun isn’t a veteran, is he?