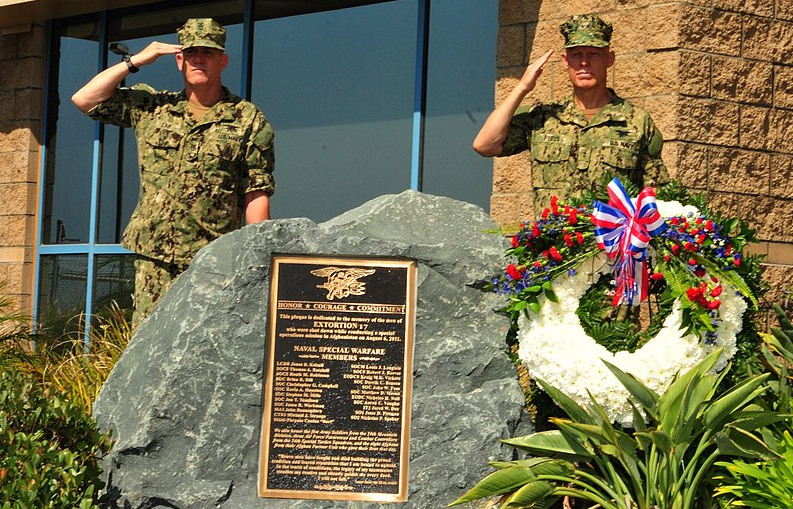 Editor’s Note: On August 6, 2021, 30 American military servicemen and a U.S. military dog were killed when a CH-47 Chinook helicopter – call sign Extortion 17 – was shot down in Afghanistan.

On the anniversary of the Extortion 17 tragedy, we remember the heroic men who were felled rushing into battle, as they had done hundreds of times before. One would hope that we could remember them for the heroes they are, but instead, the news and social media are tainted with rumors of conspiracy. This is absolutely ridiculous, and after many interviews with eyewitnesses to the event, I want to set the record straight.

For those of you not familiar with this event, on the period of darkness covering August 5th into the 6th, a CH-47 Chinook helicopter (“Extortion 17”) with thirty American service members, seven Afghan commandos, an Afghan interpreter, and a military working dog were killed while providing aerial containment for an objective that a special operations task force was hitting below.

They flew into action after a few military-aged males fled from the target building, in the hopes of capturing the still unidentified high-value target. Tragically, none aboard the aircraft survived the impact of the rocket-propelled grenade and subsequent crash.

There were many heroes that night, including the special operation strike force that primarily consisted of Rangers, who rushed to the scene of the crash without regard for their own safety and began the gruesome task of recovering the bodies. I hope that in answering some of these questions, we are able to lay to rest the rumors and remember this night for the heroes who gave their lives as well as the men who stopped at nothing to ‘never leave a fallen comrade to fall into the hands of the enemy.’

·      The Rangers were in retreat and called for reinforcements. The Rangers of 1st Platoon, Bravo Company, 2nd Ranger Battalion were absolutely not in retreat. They were in the enemy-laden province of Wardak and fought their way to the target building on infil as well as on the target itself. They had some Rangers who were wounded in action, but at the time the helicopter was shot down, they had already detained the enemy combatants with zip ties and had called up that the target was secure. They had not positively identified the high-value target (HVT) they were after yet, and with 3-4 military-aged males having fled the target, the decision was made back at the JOC to launch the SEALs in hopes of catching the ‘squirters’ and finding the HVT. Understandably so, this was a big target and the SEALs were probably more than excited to be the ones to catch him.

·      Extortion 17 was carrying the SEALs that killed Bin Laden. This is absolutely not true. The media often labels the Naval Special Missions Unit as ‘SEAL Team Six’, which paints a picture of a very small element. Although I will not get into the structure of this unit or the manning, they have more than enough sailors assigned to the unit to be capable of conducting multiple missions around the country and world in a single night. The SEALs that boarded Extortion 17 were from a completely different squadron than the SEALs who conducted the Bin Laden raid.

·      The aircraft’s black box was washed away in a flood. This is not true. First of all, there is no black box on this type of aircraft, so there was no black box to be washed away. There was, however, a flood that carried many pieces of the aircraft away. As the Rangers were securing the crash site and collecting the bodies that were strewn about (many on board Extortion 17 did not have their safety lines hooked up so when the bird went into a spin it flung many personnel all over the area surrounding the crash site) the enemy fighters in the area devised a plan to blow a small dam in the hopes of segregating the Ranger element in order to attack them and hinder their ability to maneuver.

·      The ROE prevented them from shooting the enemy forces that shot the bird down. There is no question that the ROE has only become more and more strict in Afghanistan, and that this hinders our forces. However, it was not a primary cause of this tragedy. The Rangers on the ground had already been in multiple firefights that night and had they seen the enemy personnel with an RPG, suffice it to say that they wouldn’t have hesitated to fire on them.

·      They used a National Guard Chinook instead of the SOF variant (MH-47). Here’s the thing: As much as everyone in SOF loves to fly with the studs over at 160th SOAR, there are only so many of them to go around. So, when you are among the last to launch on a mission in any given period of darkness, you have to take what you can get as all the SOAR birds are already spoken for by other strike forces. In this case, a Chinook helicopter from the conventional forces was what they had to use. They aren’t the only ones that have ever had to do this, everyone in SOF has been in this position, and although it is preferred to ride 160th, the mission comes first and you use what you have available. My last deployment in Afghanistan we had to ride conventional Chinooks every now and again, and one night we even crash-landed. After we returned to Salerno, it was sitting on mattresses as the wheels had been torn off on landing/impact. It sucks, but you know the risks when you board the aircraft.

·      They were all packed onto one helicopter, and that never happens. If only this were true, I would have had much more comfortable flights overseas. Contrary to popular belief, it is very common to pack an entire strike force onto one bird. Yes, even in SOF units like Rangers and SEALs. The night of August 5th was no different, and this is a common occurrence. To those who think this doesn’t make sense, let me ask you: How comfortable would you feel being the third bird coming into a single ship HLZ that has already had two helicopters rotate through and drop guys off? What do you think your chances of taking fire or being shot down are? Yeah, that’s what I thought. Sometimes you don’t have a choice to take multiple birds because of altitude, I have been in that situation on both infil and exfil, and it’s an uneasy feeling. Going in with one bird and maintaining the element of surprise is always better if you ask me – even if you are packed in there like sardines.

·      There was a manifest change to add seven Afghan commandos at the last minute. It became mandatory for even the national SOF task forces to take Afghan Partnering Unit (APU) personnel on all missions long before this fateful night. This manifest was likely thrown together at the last minute and probably wasn’t as accurate as it should have been. The manifest is usually the responsibility of the senior enlisted person in the strike force going out that night, so if it wasn’t accurate then that was on them – not anyone else.

·      This was an unusual mission for Navy SEALs to be used on. This was absolutely not an unusual mission for this unit to be on. Everyone in the national-level SOF task force supports each other and works together. Some nights the Naval SMU may be hitting a target with Rangers pulling security or providing QRF and/or aerial containment of the objective; other nights the Naval SMU may be pulling security, QRF, or aerial containment for the Rangers. Everyone at this level is a consummate professional, and the goal is to kill or capture the enemy, usually HVTs at this level – and working in a joint environment is vital to that.

I am sure there are more conspiracy theories out there, but these are the main issues that I felt needed to be addressed. This event is not in the same category as Benghazi, it was not a presidential attempt to assassinate anyone, and there is nothing that you aren’t being told. I know it may be hard to swallow, but bad things happen to good people in war. The men who boarded Extortion 17 that night knew the risks all too well and had gone out into the night hundreds if not thousands of times before the night of August 5th. They should be remembered for all the good they had done in the War on Terror on behalf of the rest of America, and the world. The men who responded to that crash should be remembered for their selfless actions, cutting their hard-fought prisoners loose to run down an IED-laden road only to spend hours upon hours performing the gruesome task of collecting the bodies of their fellow warriors.

War is ugly, it is not pleasant, and people die. Remember them as heroes, never forget them, and don’t taint that night with untrue assumptions.

This article first appeared in The Havok Journal on August 6, 2014.

Marty is a veteran of the 1st Ranger Battalion and Syracuse Recruiting Battalion, a former small business owner, the author of Violence of Action: The Untold Stories of the 75th Ranger Regiment in the War on Terror (Blackside Publishing) as well as Ranger Knowledge: The Complete Study Guide (St. Martins Press). He is also the executive producer of the award-winning documentary Nomadic Veterans, and the award winning short-narrative Prisoner of War. He is currently working on his third book as well as pursuing a career in film and television.