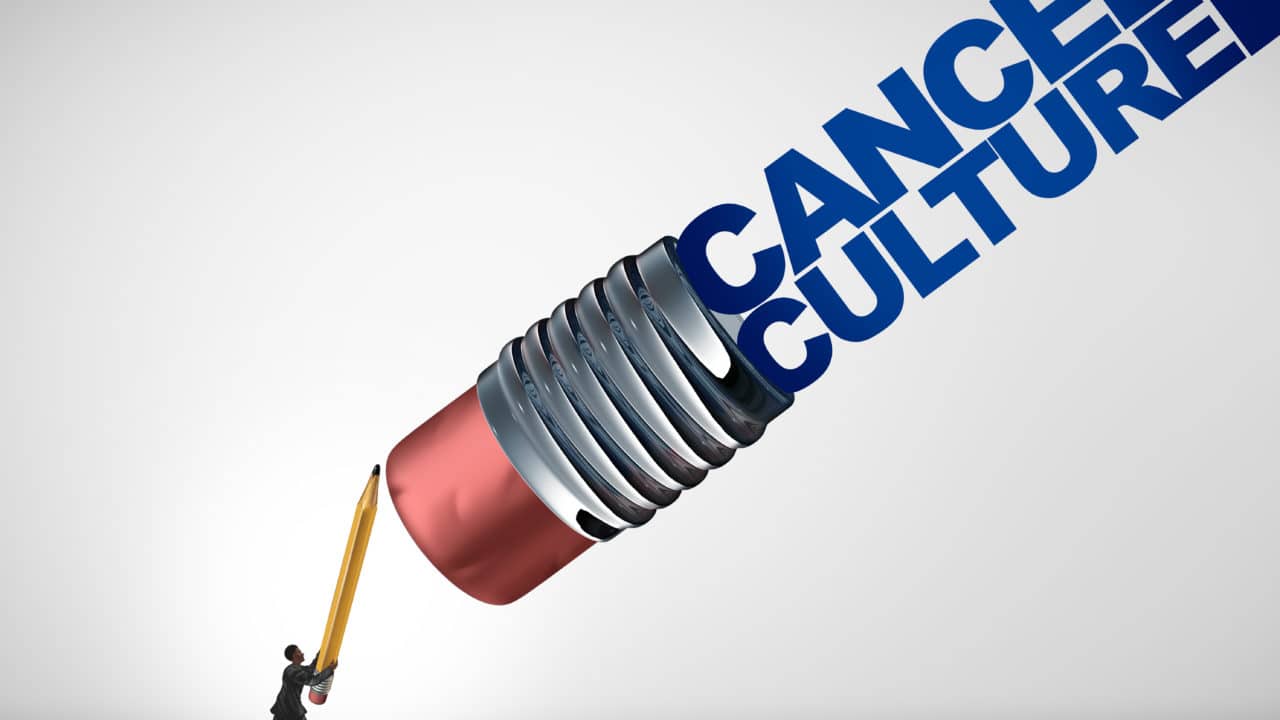 Canceled. In the first weeks of the coronavirus lockdown, that word was almost as ubiquitous as the word unprecedented. Movie premieres, concerts, even entire sporting seasons—all have been canceled as we work out a strategy to combat the spread of COVID-19.

But that word—canceled—has carried another connotation in our social lexicon of late. It’s used when we cancel people, not just events.

It was once the case that differing opinions—including ones that challenge culturally approved mores—were debated with facts and sound argumentation. Now when a person does or says something that runs afoul of current cultural preferences, we cancel that person. We shut her down with names, epithets, and ad hominem attacks. If she’s a musician, we call for boycotts of her music. If she’s an athlete, we delight in burning her jersey and posting the bonfire on social media. We now hoist the socially guilty onto a pike for all to see as they writhe, justly deserving what they get for having offended the collective. Be warned: we won’t engage your ideas; we will engage you and shame you out of existence. You will be canceled.

As someone who is bicultural, I see just how Eastern this Western phenomenon really is. I was born and raised in the United States, but my heritage and upbringing is drenched in the olive oil of Middle Eastern culture. Historically, the West has championed the right of the individual to say, believe, and act as he or she chooses. The merits of that person’s speech, beliefs, and actions would be debated even as the right to hold them is defended.

In the East and the Middle East (I’ll call both regions “the East”), the collective is primary. Each person in the East must consider the effect his or her speech, beliefs, and actions have on the collective. Eastern cultures are “honor-shame cultures.” Individuals will speak, act, and believe in ways that bring honor to their communities and avoid shame. Truth is important but should be swept under the rug if embracing (or even entertaining) it would bring shame. Now, a mixture of innocence/guilt and honor/shame runs through the West and the East. In the West individuality and the innocence/guilt paradigm have been dominant, while the collectivist honor/shame paradigm has been recessive. But with the rise of cancel culture, the honor/shame paradigm of social engagement is becoming more and more dominant in the West. Today’s cancel culture is the 21st-century Western version of the Eastern honor-shame paradigm. Easterners are better at it only because they’ve had centuries of practice. But Westerners are trying to catch up.

Today’s cancel culture is the 21st-century Western version of the Eastern honor-shame paradigm. 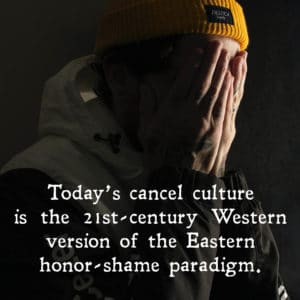 Examples of cancel culture abound. One high-schooler was accepted to Harvard, but eventually, his acceptance was rescinded due to inappropriate messages he wrote when he was 16. The student expressed regret, commenting that “I see the world through different eyes and am embarrassed by the petty, flippant kid represented in those screenshots.”

Harvard’s admissions committee voted to keep him out. Certainly, the student’s comments were inappropriate in the strongest of terms. Even though he apologized, he was “canceled” by Harvard and, more significantly, by countless others on Twitter. The meme reply captured it well: “I’m about to end this man’s whole career.”

I wonder if a similar fate awaits the college students who traveled to Miami on spring break despite the onslaught of the COVID-19 pandemic. News outlets identified some by name. Will immature and selfish comments (e.g., “If I get corona, I get corona”) result in these students being “canceled” from future jobs when employers discover them?

In cancel culture, a single mistake is perpetually unforgivable because it’s not simply a guilty act. Rather, the mistake defines the individual’s identity, turning them into a shameful person—someone who can be “canceled.” How Eastern! Juliet November summed up what used to be the differences between Western and Eastern cultures: In a Western framework, I would feel guilty because I have “done something bad”; in an Eastern honor-shame framework, I would be guilty because “I am bad” in society’s eyes. Becoming someone bad means that redemption doesn’t come by fixing the mistake. An apology isn’t enough.

In the West, we sometimes view Jesus as well-intentioned, but now mostly irrelevant. The fact that the modern West is coming to resemble the ancient culture Jesus inhabited, however, suggests that he has not gone out of fashion. In fact, Jesus is as relevant today as ever before. The story of a blind man disavowed by his parents and cast out by religious leaders provides a poignant example. 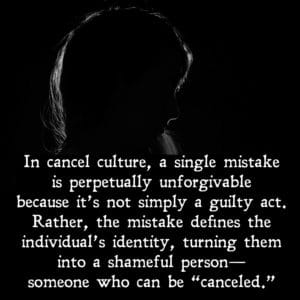 Becoming someone bad means that redemption doesn’t come with doing something to make up for a mistake. An apology isn’t enough.

In John 9, we read that Jesus encountered a young man who’d been born blind. The flint that ignited a confrontation between Jesus and the Pharisees was that Jesus healed the young man’s sight by making mud and applying it to his eyes (Jesus “worked” on the Sabbath). When interrogated by the Pharisees, the young man’s parents were so afraid to admit that Jesus healed him that they made the Pharisees ask their son. “His parents said these things because they feared the Jews, for the Jews had already agreed that if anyone should confess Jesus to be Christ, he was to be put out of the synagogue” (John 9:22)—the biggest public shame of all.

Their son—who had now seen for the first time—wouldn’t be socially intimidated. He stood up to the Pharisees and forthrightly (and sarcastically) responded that Jesus healed him. Unable to handle the public challenge to their sense of honor, the Pharisees delivered the communal-shame knockout punch by casting the young man out of the synagogue. That would define his identity. In short, the Pharisees canceled him.

Jesus’s radar for unjustified shaming drove him to seek out the young man. With tender authority, Jesus revealed that he’s the promised Messiah. He gave the young man not only the honor of physical sight but also the higher honor of spiritual sight (John 9:39). Jesus transformed his shame-ridden identity into one marked by honor. He replaced a temporary social honor bestowed by hypocrites with the transcendent honor bestowed only by God.

In cancel culture, we are defined by our latest mistake. Social recovery is rare. But being canceled needn’t define those victims. Jesus, after all, counted “canceled” people—tax collectors, zealots, prostitutes—among his disciples. Jesus was unwilling to “cancel” Thomas who doubted (John 20:27), Peter who thrice denied him (John 18:27), or his half-brother James who long refused to believe (John 7:5).

Jesus transformed his shame-ridden identity into one characterized by honor. He replaced a temporary social honor bestowed by hypocrites with the transcendent honor bestowed only by God.

Isaac Watts’s hymn beautifully describes how our guilt and our shame, our innocence, and our honor, are reconciled in Christ: 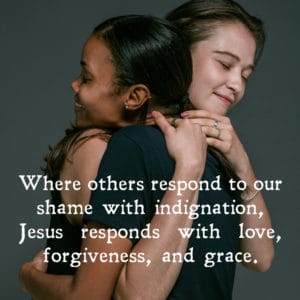 The Lord is just and kind,
The meek shall learn his ways
And every humble sinner find
The methods of his grace.
For his own goodness sake,
He saves my soul from shame.
He pardons, though my guilt be great,
Through my Redeemer’s name.

Where others respond to our shame with indignation, Jesus responds with love, forgiveness, and grace. Many are searching for a recovered or even redeemed identity. The culture will not give it to them. But Jesus can.

In our temporal and cultural snobbery, we would do well to learn from the Eastern itinerant preacher from Nazareth.

Abdu is a recovering critic of Christianity and is senior vice president for Ravi Zacharias International Ministries and is the author of several books, including Saving Truth: Finding Meaning and Clarity in a Post-Truth World and Seeing Jesus from the East: A Fresh Look at History’s Most Influential Figure. For most of his life, Abdu was a proud Muslim who studied the Qur’an and Islam. But after a nine-year investigation into the historical, philosophical, and scientific underpinnings of the major world religions, he became a follower of Jesus.

Used by permission of the author.