HomeCultureAccommodating Women in SpecOps and Combat Arms: One Man’s Perspective

As a woman, you MUST be able to be strong enough to physically handle the daily grind of the unit without any accommodation that wouldn’t be given to a male. 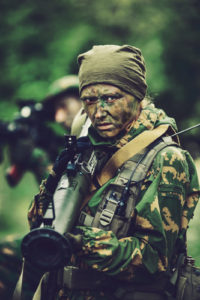 An infantry soldier who can’t do 50 plus perfect push-ups is fooling themselves. I can’t stress this enough, make peace with muscle mass and strength training. I understand women are scared of getting “bulky” or “gross” from too much muscle. But if you want to be combat arms you must make peace with that. Your motto needs to be “train like a man, look like a goddess.”

You must make body composition modifications for this career. I am 6 foot 2 inches and 240 pounds. When I play full contact semi-pro football I try to get as close to 250 pounds as I can. When I had myself recalled to active duty to deploy my bodyweight was 228-235 at the heaviest. You will have to build more mass to be a grunt, Ranger, or SEAL period. A man might be able to stay the same size and do the job effectively but remember as a woman you are NOT as strong. So to do the same job you will need muscle. Make peace with it.

Now does that mean we should tolerate blatant sexual harassment in infantry and SOF units? Absolutely not! Women should never be groped, touched, fondled, or otherwise assaulted…EVER! Now that being said there will be times of close contact. And some of the contact will not be affectionate. March of 1990 I signed into my airborne unit at Ft Bragg, NC.

I made it through the first week with no sweat. I got processed, got squared away, met my boss, and met my troops. Then Friday… I .got my ass whooped! By whom you ask? My troops! We had a “bear pit” like in the movie Heartbreak Ridge. It was walled with sandbags and had a dirt (I mean mud) floor. As soon as the First Sergeant dismissed us 10 soldiers commenced to roughing me up as they dragged me kicking and screaming to the pit. And just like the Borg, resistance was futile. Those ten soldiers sent me up into space and I landed in thick mud!

I was so covered in mud I had to walk over to the barracks, knock on doors, and borrow something to wear to drive home in so I didn’t destroy my car with mud. And guess what? It was our unit’s culture and the chain of command supported it.

When I got my Senior Parachutist wings I was subjected to another piece of unit lore …BLOOD WINGS! I was not at Bragg then, but at another unit in Airborne land. This unit had a wing ceremony to die for. Each senior or master-rated jumper walked up and pounded my wings into my chest…after pulling them out after the guy before them pounded them in. So needless to say I had 14 holes in my chest. What if I had been female?

Now I can hear the accusing voices now….HARASSMENT! HAZING! And maybe they were. And these are extreme examples of unit culture gone wild, but some units in combat arms and SOF do things (possibly not this extreme) one might call hazing. For example, the Ranger Battalion still smokes the living crap out of new personnel when they arrive and whenever their team or squad leader feels the need. Don’t know the maximum effective range of the Carl Gustav in the rain? Get smoked! Don’t know your Ranger history? Get smoked! Act in a way your team leader doesn’t like? Get smoked! Catch your squad leader in a bad mood? Get smoked! It’s Ranger culture.

Now what’s going to happen when little Suzy-Q gets to her infantry, airborne, or ranger assignment, draws the ire of her boss, and gets smoked until her butt sucks buttermilk? Is she going to scream hazing or harassment?

Why am I bringing up the gay thing again? Because every time you bring up the subject of men and women not working well in combat arms because of mutual attraction, someone ALWAYS says “well there are gay men in infantry and they are attracted to men.” Yes, but you will NEVER see two gay men in the same company, much less the same platoon, in a romantic or sexual relationship. It just doesn’t happen. I bounced this concept off of a gay friend of mine and they told me I was right on target.

Therefore females should never date inside your unit. These men are supposed to be your brothers, and we don’t date our brothers. If you want respect reverence and brother/sisterhood, don’t date a guy in your combat arms or SOF again. I was in units with female officers during my career. We respected and revered them. Then one got busy messing around with enlisted men in the battalion. Her credibility as a leader was lost. From that moment on she was a hot chick to be pursued; nothing more.

Is all this fair? No this is not fair, but this concept of women in combat arms is brand new and compromises will have to be made. Regrettably, most of the compromises will need to be made by females themselves. Will the males need to adapt? Yes, but remember females you are joining a time-honored institution. And just like when you are a guest in someone’s house, you don’t go in making demands. Eventually, after a few years, it will be YOUR house. But for now, you need to conform.